Pied / Torresian Imperial Pigeons in Queensland are very easy to identify. Within the Columbidae (the wider family of pigeons) they are formally classified as Ducula, an important genus of imperial pigeons. However, their specific assignment remains confused.

In earlier times ornithologists identified sub-species based on small variations in external appearance. This practice gave rise to multiple scientific names for Ducula in Australia. Most authorities now recognise a single species of native Australian imperial-pigeon.

Not all agree on how this species should be named. Ducula bicolor is used in field guides that follow Christidis & Boles (1994), while some authorities prefer the name Ducula spilorrhoa. Diverse proposals about sub-species remain unresolved. There has been no comprehensive genetic analysis as yet. 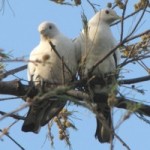