For years PIP nests were only infrequently spotted in Cairns, although the birds are commonly seen flying and foraging around the city each summer. Then during the summer of 2011-12 Brian and friends reported an unusual flurry of PIP nesting in the city rather late in the season. The same keen PIP team has started monitoring the Esplanade and part of the CBD again this year. The first six PIP nests in Cairns were reported at the end of September and several more were discovered during the first week of October thanks to Brian, Phil and Yu. 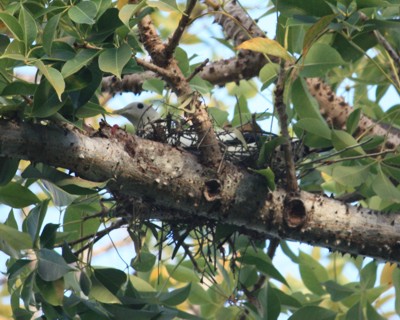 In Townsville the first PIP nest of the season was spotted by Jenny who sent in the photo above.

On 6 October Robyn and Beth reported they observed a PIP high up under the canopy of a flowering Poplar Gum in Western Lions Park at Heatley. The single bird was calling but no partner was observed. A bird, thought to be a Little Friar bird started harassing the PIP which shifted position but remained in the tree.

Beth and Robin plan to continue to monitor as they had been seeing PIPs in the park and the nearly Heatley State School grounds for about two weeks, but had not observed any mating or nesting behaviour as yet. Last year they noted a pair did nest in the Western Lions Park, above the BBQ area but they did not see any evidence of fledglings.

Has anyone seen PIPs starting to build nests anywhere else? Many more PIPwatchers are needed!