On 18 October two PIPs were spotted building a new nest – thank you Cecily!

A week later incubation was under way, as shown in the photo below – thank you Jenny! 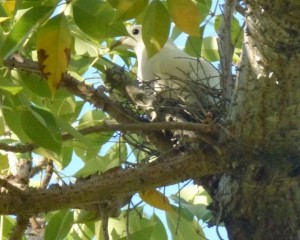 We’ve had very few reported PIP sightings around Townsville so far and this nest is very welcome news.

Also of interest, its in the same tree that hosted a PIP nest last season. Are these the same birds as last season? That does seem likely, although we’ll never know for sure.