PIP numbers seemed to have dropped sharply at Low lsles and Green Island, according to informal observations. There were formal counts this month.

Already last month (February 2014) it seemed things were not going well for nesting PIPs. At Low Isles nests were seen to be prematurely abandoned, leaving either an unhatched egg or a young chick with no chance of survival. 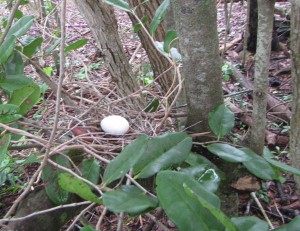 There was no local disturbance to account for these sad losses. It was probably a shortage of food that forced PIPs to abandon breeding efforts.

Island-breeding PIPs rely entirely on mainland food resources, predominantly rainforest fruits. This is of course the reason that breeding PIPs fly great distances daily, to seek food in distant forests and return to their nests on the island.

We can only speculate that native trees may have been stressed by the prolonged period of low rainfall experienced in the far North region, and may not have produced their normal abundance of fruit. That would have left PIPs without sufficient ‘fuel’ to complete the breeding cycle.