At the end of October Pied Imperial-pigeons were diligently brooding in the nest they had built in the centre of  this tall palm on Cairns Esplanade. A few days later the birds had disappeared and the tree showed fresh pruning cuts, suggesting a disastrous event for this PIP family. 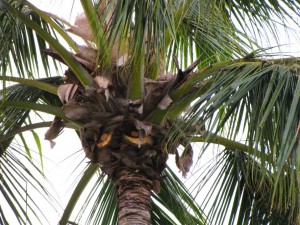 The palm pictured is one of many on the Cairns Esplanade that were pruned between the end of October and early November this year. No urgent need for pruning was apparent. Coconuts, where present, were  in the early stages of development, too small to be hazardous to humans.

It is impossible to determine the number of eggs and chicks lost due to nesting birds being displaced by such pruning. Intensive PIP nesting was in progress and this time of year is also an important nesting period for many other birds.

PLEASE add your voice to ours and ask Cairns Regional Council to schedule tree pruning before and after the nesting season, NOT during this period.    Any naive belief in avoidance of trees with active nests is ineffective for protecting vulnerable birds.