Small numbers of PIPs were still around in Cairns and Townsville during early April but the majority probably set off northwards during March, heading to PNG for their “winter break”.

By the middle of April very few PIPs were sighted and some observers confirmed they had seen none at all. The last observation reported to PIPwatch came from Jenny in Townsville on 14 April, accompanied by this lovely photo, thanks Jenny! Maybe the PIP was saying goodbye to those two pee-wees? 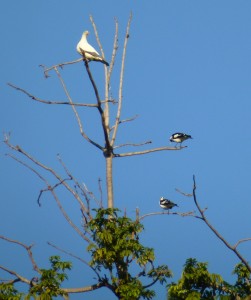