The team left Cardwell at 1pm in the boat “Ocean Adventure I” skippered by Dean Beech, arriving at North Brook approx 2pm. Weather was fine and visibility good. For the first 90 mins a sea-bird survey was conducted, first from a point anchored off the northern tip of the island and then by motoring around both North and Middle Brook. There were large numbers of terns (mostly Crested (c.300) and Black-naped (100) nesting on the northernmost beach of North Brook. Some mating was still happening. A few Bridled terns were sighted on the rocks on the ocean side but no nests were sighted.

Beach stone-curlews are known to breed on N. Brook but none were sighted. White-bellied sea-eagle was seen over South Brook, also another raptor perched in a tree, not positively identified – possibly Brahminy kite or osprey? There was also a pelican and an eastern reef heron (grey phase) on the western-facing beach on N. Brook. Land birds included a sacred kingfisher seen, and scrubfowl heard.

Because of the nesting terns we did not land on the island so the other activities traditionally undertaken (observation and survey of nesting pigeons and other forest birds, vegetation survey, seed collection and beach rubbish collection) were not done. No surveys of coral transects were done.

The count was conducted from the boat anchored off the ‘spit’ at the north-western tip of N. Brook Island. This position gives a clear view of both the northern and southern approaches to the island. Counting started at 3.30 pm and continued till just before 7.0pm when it became too dark. Counting was mostly shared between Whitney, Dan, Nina and Denise, and the main scribes were Margaret, John Herdmunn, Julie and myself. Whitney and Dan also did some scribing and John H also did some counting. John Winter supervised counting and scribing and gave advice to the less-experienced counters. Before leaving John gave a short talk to everyone outlining the history and importance of the counts.

Thirty count sheets were completed with figures for both incoming and outgoing pigeons, recorded in 15 minute segments. These were totalled up by John Winter, Margaret Thorsborne and myself the next morning. Total number of incoming pigeons was 20,151 with just over 8,000 birds flying in from the north, and just over 12,100 from the south. The count also recorded an unusually large number of outgoing birds, total 3260. 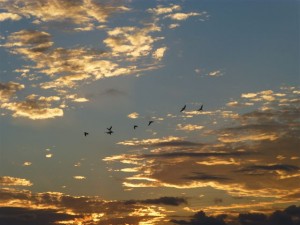