PIPs/TIPs usually return to Queensland coastal areas during August and September, spreading gradually south. Timing has been variable in different seasons, and at different locations, so we are seeking everyone’s help to document their behaviour.

Update: first sightings south of Cairns
Thanks to Rae, who heard a single PIP at Tyto Wetlands on 15 August, earlier than usual for Tyto.
Thanks to Pam, who saw a single PIP at Hermit Park in Townsville on 17 August, also a surprisingly early arrival for that area.

First reports of the season!
A few early arrivals were sighted in Palm Beach and Cairns during the week 4 to 10 Aug. Thank you Sally for the first report to PIPwatch this season, and thanks also to the editors of Cairns Birders newsletter who published information from other observers.
On 16 August three PIPs were spotted at Yorkeys Knob Esplanade, thank to Laura.
On 20 August one PIP sighted at Centenary Lakes, thanks to Brian.

Please keep a lookout and please report YOUR sightings! 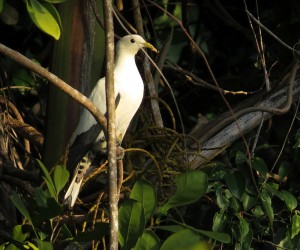