Birdlife NQ conducted their annual Pied Imperial-Pigeon count in the Mission Beach area on 10 November. Teams of volunteers monitored four previously established sites and one new location and counted all PIPs flying out from the mainland between 4:00 and 6:30 PM.

All four established sites had higher counts than last year when extremely low PIP numbers in Nov 2011 could be explained by the extensive habitat damage caused by Tropical Cyclone Yasi. 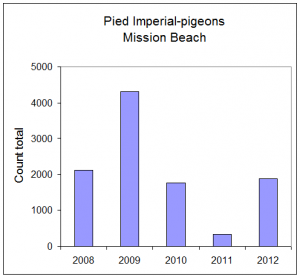 The 2012 total for the four sites combined approximated that of 2010, the last pre-Yasi count. Tentatively this might indicate the local PIP habitat has been recovering quite quickly from cyclone damage. However such short term interpretation is uncertain. Year-to-year variation in counts for prior years was high, unrelated to cyclones, so maintaining counts over future years will be important to assess longer term trends.

Kurrimine Beach was counted for the first time this year, thanks to important data received from Neville and June. These alert observers near El Arish recorded flocks of PIPs flying from the ranges in the direction of Kurrimine, a valuable new extension of the Mission Beach PIP counts.