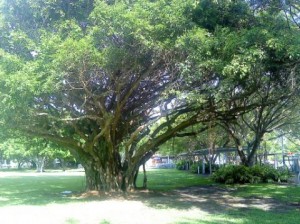 A Pied Imperial-pigeon nest was destroyed on 31 January when Council workers/contractors pruned a street tree (Ficus benjamina, photo above) on Pier Point Road. The nest was under observation by Brian who recorded the PIP parents were tending a small chick during late January. Their chick was too young to have survived the loss of its nest.

In November we reported another nest loss to pruning on Cairns Esplanade. Both pruning losses were noticed only by chance. How many more nests may have been lost due to pruning, without being recorded?

Pied Imperial-pigeons are not the only native birds at risk from careless pruning. Many other native species nest in Cairns street trees including Yellow Oriole, Figbird, Helmeted Friarbird, Peaceful Dove, Yellow Honeyeater and Fig-parrot.

If you care about survival of native birds in the Cairns area, please join us in asking Cairns Regional Council to raise awareness among their staff and contractors and ensure their pruning crews check carefully for nests before cutting trees.